The Main Challenges for Future Reconstruction Efforts in Syria: Interview with Rabie Nasser

Katty Alhayek (KA): What are the main challenges today for reconstruction efforts and rebuilding the future of Syria?

Rabie Nasser (RN): The Syrian Center for Policy Research identifies the main challenges for the reconstruction efforts categorize as first, the surviving of political tyranny and increasing compromises that accept the hegemony of subjugating powers. The political oppression was a core root of the social movement and during the conflict the pre-conflict political oppression aggravated to political tyranny and fundamentalism. Those internal and external powers which abuse authority and violated all human and social rights and norms cannot build an inclusive reconstruction that is needed to address the Syrian catastrophe. Second, the identity politics is a major challenge to reconstruction process as it degrades the social cohesion; in this regard, justice and legitimate institutions are a core part of building the trust between people and with the institutions to create the space to social relation recovery. Third, the injustice and deprivations including deaths, injuries, torturing, kidnapping, forced displacement, poverty, difficult living conditions, among others; increased the inequity among the population which is a major and urgent challenge that need enormous institutional capacities, well designed policies, and material resources. Fourth, the expanding of conflict economy and conflict related crony elite which contribute to destruct to a large extent the economic resources, relations, and institutions; and reallocate the remaining resources to fueling conflict and subordinating society. Those four challenges form a well established system that created incentives on local, national and international levels, which makes tackling it an exceptionally difficult cause.

KA: Syrian children’s health and education were significantly affected by the ongoing war; how do you think the investments in reconstruction efforts should address children’s well being, and the so-called “lost generation,” specifically in the worst affected areas of the country?

RN: The Syrian society is young in that children below 18 years old consists almost half of the population and the conflict affected harshly their lives as around 13 per cent of the conflict related deaths is children. Since 2012 around half of the school age children did not enroll in the education system including the child refugees. Moreover, the quality of education has deteriorated in terms of quality and conditions. The dispersion of families and loss of breadwinners, in addition to poor living conditions, lack of access to health, and the suffering of malnutrition, trauma, and the loss of normal life of children are some examples of the burden on the new generation of Syrians. Furthermore, the refugee children are growing up in different environments, cultures, languages, values, living conditions which creates substantial challenges to reintegrate them in the Syrian society.

The burden of conflict is not equally distributed across the Syrian children, which increases the inequity between children in terms empowerment and opportunities. Countering the challenges, apart from the humanitarian, support needs inclusive institutions that address the deprivations of the most vulnerable groups of Syrians and this depends to a large extent on the way of exit from the armed conflict.

KA: Foreign funding and investment plays a crucial role in post-conflict reconstruction efforts. How do you see the role of foreign investments in the future of Syria and which countries do you think might be the key players?

RN: The total economic losses until the end of 2015 reached USD 255 billion, which is equivalent to around five times of the GDP in 2010. This enormous loss included the destruction of the infrastructure and reduction in the economic activities according to SCPR. The loss includes the severe deterioration of economic foundations such as population, human capital, institutions, and resources. Furthermore, the conflict economy reshaped the system of incentives and reallocated the resources and opportunities to the influential powers within the armed conflict. Therefore, the challenges of funding of reconstruction are related to the volume of the losses, and the complicated new conflict economy actors and incentives, and the hegemony of warlords over the Syrian economy.

The corner of funding is related to the shift in institutions to overcome conflict and build efficiency, just and inclusive institutions that rebuild trust between Syrians and between them and the political institutions. The space for society is crucial to participate in designing the reconstruction and the identification of the path for peace that overcomes the conflict’s impact and roots. Legitimate and inclusive institutions can create the environment to attract external funding and unitize it in line with the Syrians priorities. The other part of funding is covered by the Syrians’ participation in the process that will decrease the costs and increase the benefits for them and reduce the potential burden of depending only on the external funding.

However, if the political oppression and conflict economy elite prevail after the end of the conflict, the Syrian economy will be attracting many foreign investors due to the huge opportunities created by the destruction regardless of the inclusivity, justice, and sustainability. In this scenario, the participation of the Syrian society will be at a minimum and inequality will surge with the elite’s control of the opportunities. Finally, the countries and investors who will contribute depends on the scenarios and nature of institutions in the post-conflict period.

KA: Can you share with us what are your future projects?

RN: As a researcher in the Syrian Center for Policy Research, I am working on the Alternative Development Paradigm for the future of Syria which is an initiative by almost 50 experts who are working on developing policy options for the Syria challenges in line with the Syrian context. Additionally, the center is working on assessing the socioeconomic impact of the conflict in regular basis.

Rabie Nasser is a co-founder of the Syrian Center for Policy Research, working as researcher in macroeconomic policies, inclusive growth, poverty, and crisis socioeconomic impact assessment. He obtained a B.A. in Economics from Damascus University 1999. In 2000 he obtained a Diploma in Financial and Monetary Economics from Damascus University. He has MSc in Economics from Leicester University, UK. Before joining The Syrian Development Research Center, Nasser worked for the State Planning Commission as Chief Economist and Director General of Macroeconomic Management Directorate in 2004 and 2005. Then, he worked as an Economic Researcher in Arab Planning Institute in Kuwait. Then he was a senior researcher working between 2009-2011 for the Syrian Development Research Center that conducts studies, evaluations, and applied research. 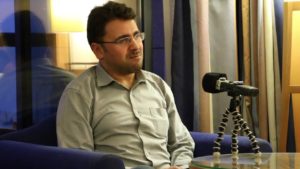 About the Author: Katty Alhayek